SYPHILIS TREATMENT IN KERALA AND TAMILNADU 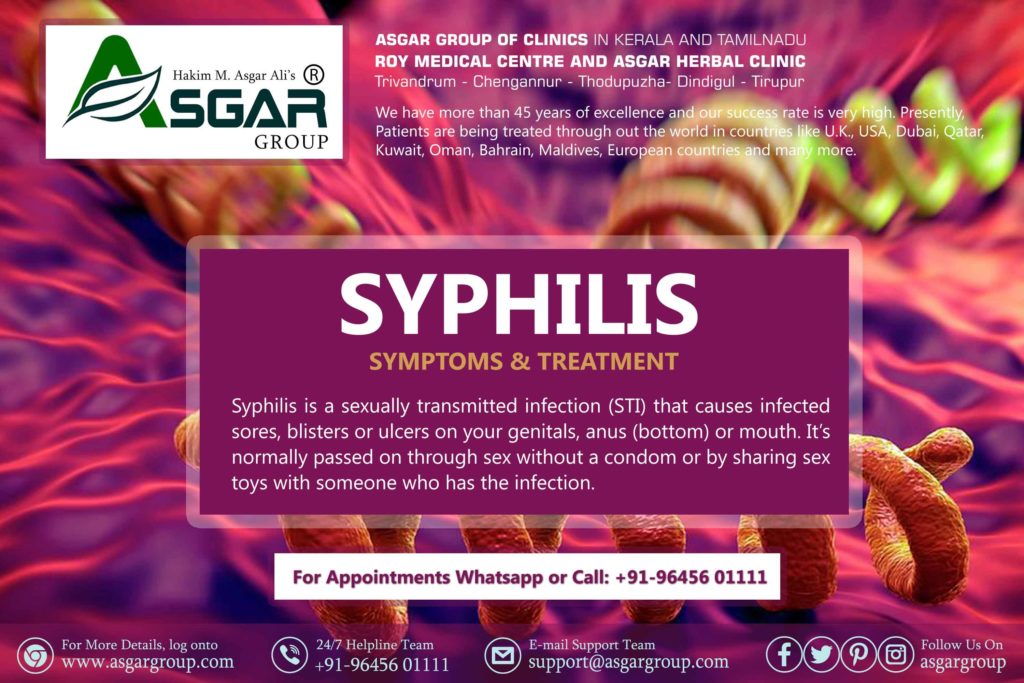 The symptoms of syphilis are the same in men and women. They can be mild and difficult to recognise or distinguish from other STDs. Symptoms may take up to 3 months to appear after initial infection. Syphilis is a slowly progressing disease that has several stages. The primary and secondary stages of syphilis are very infectious.

One or more painless ulcers (know as chancres) appear at the place where the syphilis bacteria entered the body. On average, this will be 21 days after sexual contact with an infected person. Chancres may be difficult to notice and are highly infectious. The usual locations for chancres are:

On the vulva (outside the vagina) or on the cervix (neck of the womb) in women.
On the penis in men.
Around the anus and mouth (both sexes). If the infection is not treated at this point then it will progress to the secondary stage.

If the infection has not been treated, the secondary stage of syphilis will usually occur from 3 to 6 weeks after the appearance of chancres. The symptoms often include:

A flu-like illness, a feeling of tiredness and loss of appetite, accompanied by swollen glands (this can last for weeks or months).
A non-itchy rash covering the whole body or appearing in patches.
Flat, warty-looking growths on the vulva in women and around the anus in both sexes.
White patches on the tongue or roof of the mouth.
Patchy hair loss.

During this stage syphilis is very infectious and may be sexually transmitted to a partner. These symptoms will usually clear up within a few weeks, but may re-occur for years. Treatment at any time during the first two stages of syphilis will cure the infection.

HOW SYPHILIS IS PASSED ON

Syphilis can be transmitted through direct contact with a syphilis sore. The methods of transmission are: