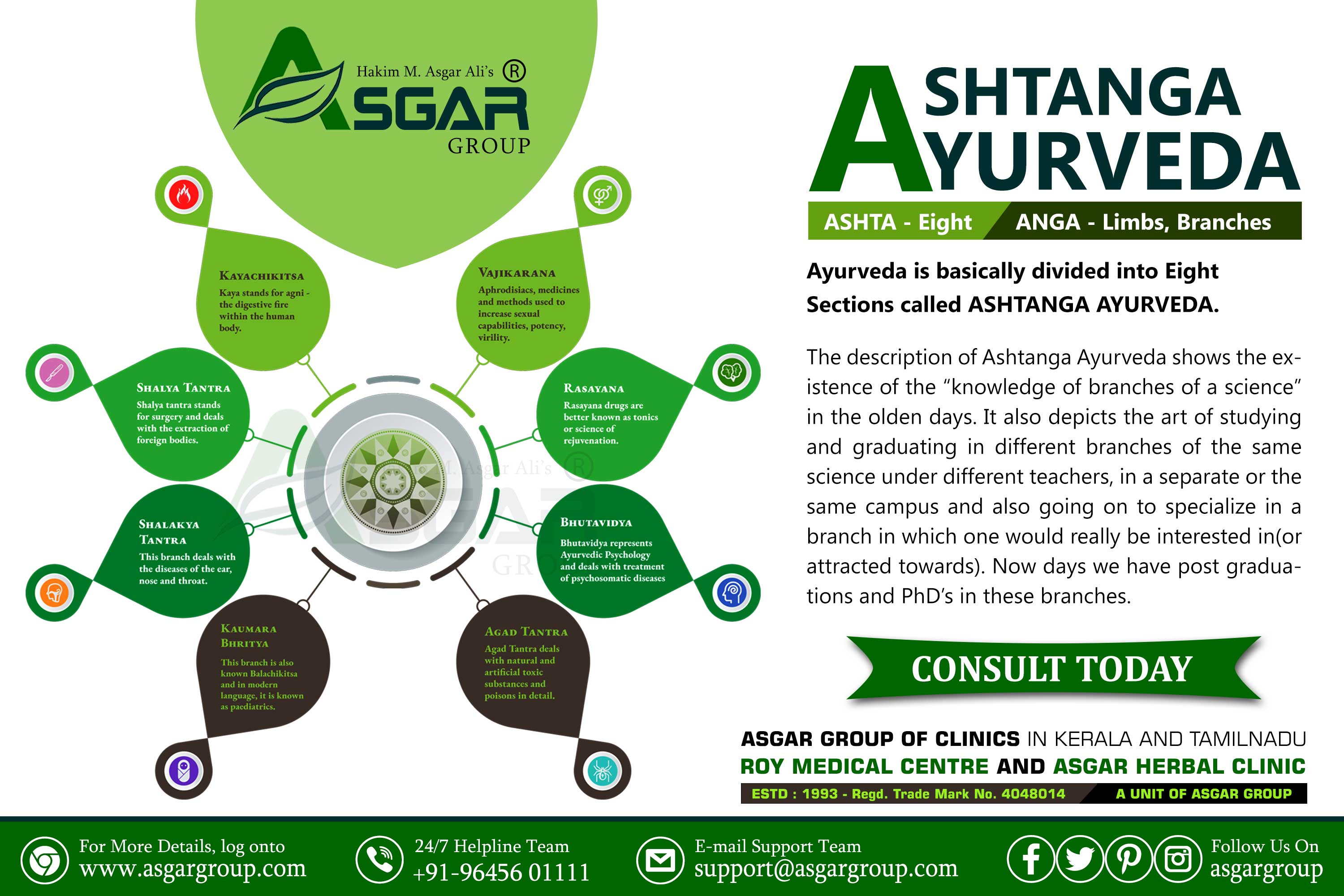 The description of Ashtanga Ayurveda shows the existence of the “knowledge of branches of a science” in the olden days. It also depicts the art of studying and graduating in different branches of the same science under different teachers, in a separate or the same campus and also going on to specialize in a branch in which one would really be interested in(or attracted towards). Now days we have post graduations and PhD’s in these branches.

The word ‘Kaya’ represents ‘Agni’ – the digestive fire in the body. It is responsible for the metabolism in the body. The imbalance to this ‘Agni’ is the cause for many diseases. Kaya chikitsa deals with the treatment of general ailments, such as fever, diarrhea and cough, by treating Agni.

It’s a division of otorhinolaryngology (ENT) and ophthalmology. This branch of Ayurveda deals with the treatment of diseases of the organs above the clavicle. It includes the treatment of eyes, ears, nose, throat, mouth, teeth and head.

It deals with health and diseases related to children. There are three aspects that must be remembered while treating children –

• The dosage of medicine is different for them • The medicines given to them must be palatable to them.

Due to these conditions, treating children is done in a different manner. Hence a separate branch is devoted for them.

This form of treatment deals with the treatment of poisoning from animals, such as snakes, insects, spiders, scorpions and also of plants, metals and minerals.

It deals with male and female genetic organs. This branch of Ayurveda deals with treatment that helps to get good progeny. It provides various medicines and therapies to improve the virility and the sexual prowess of a person to help him to get a good progeny.

It promotes long life and good health. It deals with old age problems and poor immunity. It deals in rejuvenation and restoring the youthfulness of an individual and deals with various therapies and herbs that have to be taken to restore the youth & vitality.

This branch of Ayurveda deals with diseases like insanity, epilepsy and diseases caused by affliction of external factors such as evil sprits and ghosts. In other words it may be known as the branch that deals with the treatment of psychosomatic diseases.

It is important to note that only a trained Ayurvedic practitioner can accurately determine a person’s prakruti and dosha. This classification is based on a thorough examination, which includes observing one’s facial features, body build, way of walking, speech patterns, pulse, and much more.

Just that a healthy mind nurtures a healthy body. Follow a holistic lifestyle – the right kind of food in the right quantity at the right times. Be active, have healthy thoughts, do not nurse negative feelings, be positive, do your duty sincerely – both on the personal and professional front.