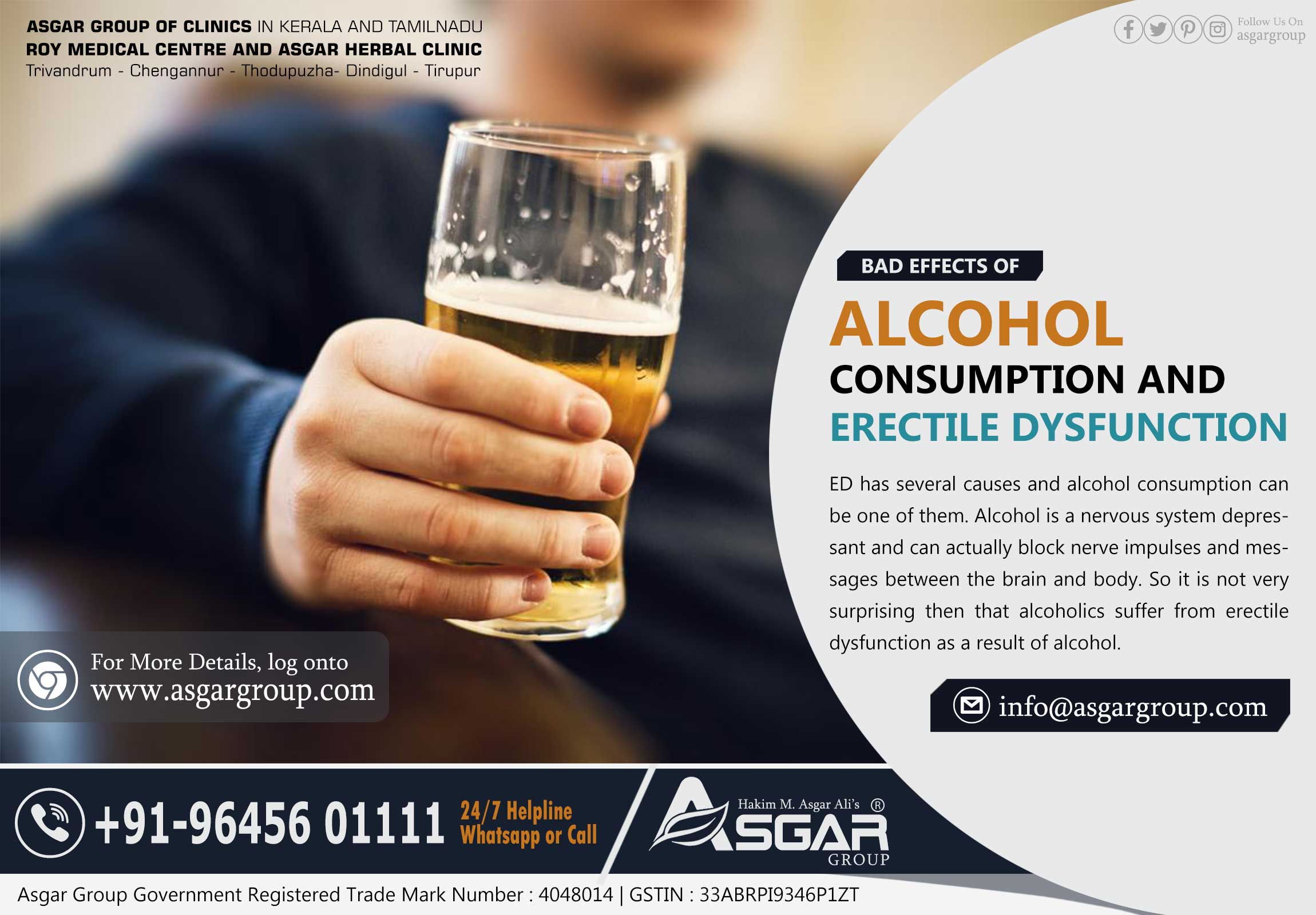 Erectile dysfunction is a condition in which a man is unable to achieve an erection sufficient for sexual intercourse. In some cases the man is able to achieve an erection but unable to maintain it long enough to complete the sex act. Most men experience erectile difficulties at some point in their lives, but this is different from ED. ED has several causes and alcohol consumption can be one of them.

Alcohol Effects on the Body

Alcohol is a nervous system depressant and can actually block nerve impulses and messages between the brain and body. This is why drunk people often experience slurred speech, emotional outbursts and difficulty walking. But even small amounts of alcohol will affect the nervous system, causing slower reflexes and fuzzy thinking. Moderate drinking one to two drinks a day, for men of any type of alcohol, may actually improve cardiovascular health, Excessive alcohol use and alcohol abuse, can cause scarring of the liver, high blood pressure and an increased risk of some cancers.

Unfortunately, the list of ‘bad’ effects of alcohol is much longer!

Alcohol makes people far more likely to have unwise sex with the wrong person – and therefore to get pregnant, to catch infections, and to embark on affairs that cause marriage break-ups.

Alcohol is bad for the unborn baby – so it should only be taken very sparingly in pregnancy. During 2008, there have been conflicting reports about how safe it is for pregnant women. Some authorities feel that during pregnancy it should be avoided totally. At present we don’t know whether alcohol taken on the night of conception could be bad for the baby.

Alcohol is a major cause of impotence (erectile dysfunction). A lot of younger males don’t realise this because they think that booze boosts ‘horniness’.

A lot of men who are hooked on alcohol develop permanent ‘Brewer’s droop’ – and often loss of interest in sex as well.

Where alcohol may succeed as an aphrodisiac in getting people “in the mood” it may fail in execution. During an erection, the penis fills with blood then the vessels close, preventing back flow, so that the penis remains erect. In the short term, over consumption of alcohol causes the blood vessels in the penis to expand, allowing for more blood flow, but prevents those vessels from closing. As a result, the penis may become erect but not remain so, as there is nothing to prevent back flow. In the long term, over consumption of alcohol actually damages the blood vessels and contributes to hypertension and even heart disease, both contributing factors to erectile dysfunction.

If large amounts of alcohol consumption are an ongoing issue, the patient must take control of the alcohol abuse as well as the erectile dysfunction in order to fully conquer the issues. Alcoholics Anonymous is a popular way of dealing with alcohol abuse. Speak to your doctor about potential depression issues. Too much alcohol is always an unhealthy thing. It slows down the entire body leading to permanent damage. Most men would prefer to keep their sex drive strong as well as their sex organs.