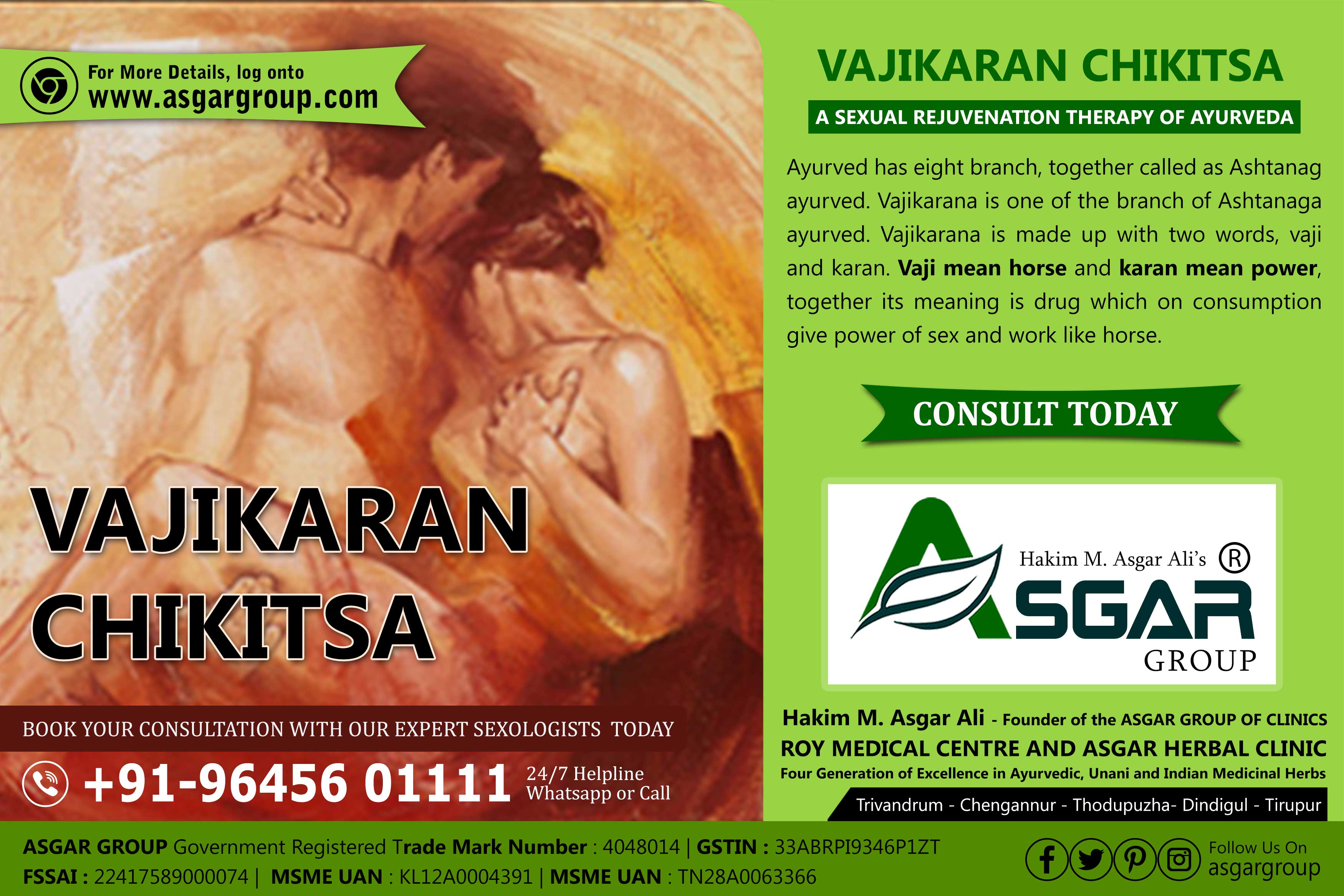 Ayurveda has eight branch, together called as Ashtanga ayurveda. Vajikarana is one of the branch of Ashtanaga ayurveda. Vajikarana is made up with two words, vaji and karan. Vaji mean horse and karan mean power, together its meaning is drug which on consumption give power of sex and work like horse. This modern life apart from medicine and yoga, Rasayana and vajikarana also important. Ayurveda has detail description of vajikarana, which is useful for human being.

Rasayana which increases the quality of sexual or reproductive organ is termed vajikarana. The word vaji means a ‘horse’ and the horse have prominent sex organ and associated with powerful sexual vigour.

1. Sukrala : The drugs which causes qualitative and quantitative increase in the Sukra (sperm) are known as Sukrala. The drugs like Asvagandha, Musali, Sarkara, Satavari belong to this group. These drugs are useful for aspermatogenesis (absence of sperm in semen) and oligospermia.

3. SukraStambhaka : The drugs which increase the time of sexual intercourse are known as SukraStambhaka. The drug belongs to this group is Jatiphala. The best indication of these drugs is premature ejaculation.

4. SukraSoṣaka : The drugs which dry the semen may be known as SukraSosaka. Haritaki belongs to this group.

Charak Samhita lays down the following benefits of Vajikarana therapy

Who should not consume Vajikarana preparations?

As per Ayurveda, it is recommended that the person below 17 years of age and more than 70 years of age should not consume Vajikarana preparations. These preparations have to be consumed by “jitendriya purusha” or man who has control on his senses and desires. If Vajikarana preparations are consumed by “ajitendriya purusha” or man who has lost control over his senses and desire, he may prove harmful to society.

Sex is also important need like food for every animals, human also not exception to that. In present era human cross the all limit for sex and due to this, he suffering from variety of new disease. There is need of Sex to all, but it have some rule. Ayurved has prevention and curative aspect. In vajikarana part, Ayurved told us all details related to sex. Modern science just told us medicine to increase stamina of sex, while Ayurved give rule and drugs related to pre and post sex. Ayurved which is our ancient science which fulfill all need related to sex.

Vajikaran is an important treatment modality as per Ayurveda and proposed benefits are manifold including increased sexual capacity, improving health of future progeny as well as in treatment of many common sexual disorders like infertility, erectile dysfunction and premature ejaculation.

Differences in the philosophical base of the Ayurvedic science and modern medical science results into inability of effective collaboration between these researchers and practitioners. Lack of research as per current scientific standards is the main criticism of vajikaran. Lack of standardization of formulations and difficulty in getting unadulterated herbs are realistic intricacies in the utility of vajikaran preparations. Randomized controlled trials of theses formulations can be helpful in understanding efficacy, possible side effects and other treatment related parameters.

Summary : In brief, sex is a powerful instinct and Ayurveda has described very nicely the “vajikarana” (rule and regulations of sex). I am sure that anyone who put into practice the rule of vajikarana as advised by our ancient masters will enjoy a happy life.